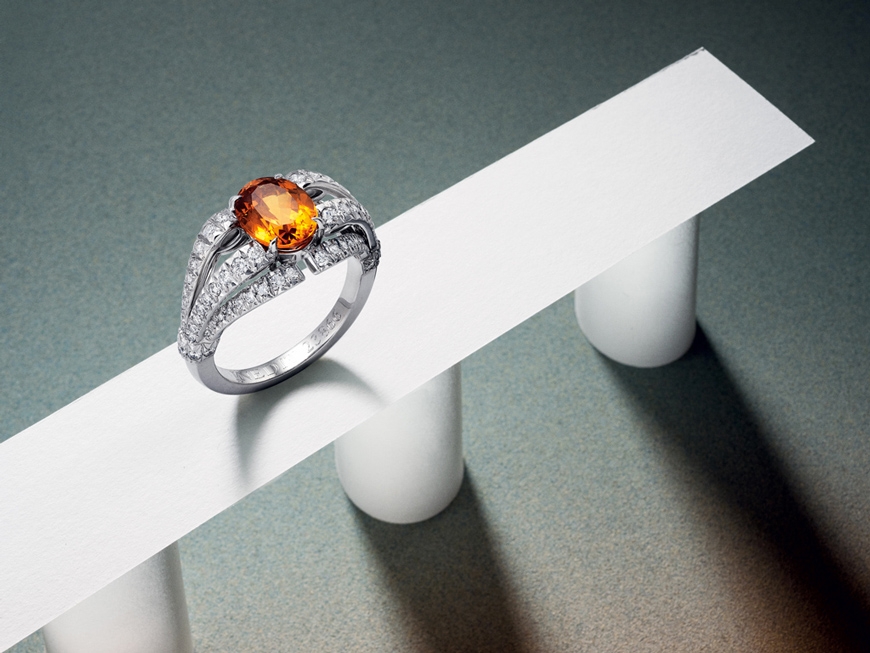 Garnet comes from « granatium » which means « pomegranate », from the red fruit. It is this color that we have in mind when we think about Garnet.

Did you know that Garnet is a large family of mineralogy ?

Indeed, Garnet can be red, orange, pink or green. Sometimes it can present a « color change effect »: bluish to purplish for example. This kind of Garnet is particularly researched by collectors. Like said previously, the red Garnet is the most famous one and used since a thousand years. We are talking about Almandin Garnet variety. This gemstone was usually an ornament in Middle-Ages.

Orange Garnet, coming from Spessartite variety. It's often named Mandarin Garnet thanks to its natural saturation of Fancy Orange. To compare, orange Hessonite Garnet, is more included and has a syrupy appearance. That's why it is not often used in jewellery, compared to Mandarin Garnet.
Inédit's design, Volute ring, set with a Mandarin Garnet, oval cut and diamonds.

Green Garnet, called Tsavorite is a variety of Grossular Garnet. Its deep green color can be confused with Emerald. It has been recently discovered, in 1967, by the Scottish geologist Campbell Bridges, in Tsavo national park in Kenya.Inédit's design, Arabesques ring, set with a Tsavorite, pear cut and diamonds.

Also, Malaya Garnet was discovered in 60’s in Umba region in Tanzania. Its delicate combination of orange and pink is found in Pyrope Spessartite varieties. Two mineralogical types of Garnet meet in order to create this rare color.

Did you know ? Garnet is the birthstone for January and the gem of the 2nd wedding anniversary !